Plagiarism is a serious offense. This guide provides practical advice on how to avoid it.

Plagiarism is using someone else's words or ideas without giving them proper credit.

Plagiarism is a serious problem, both in academia and in professional settings.

According to the Madison College Academic Integrity webpage, students who plagiarize will be disciplined according to the 10 disciplinary sanctions for academic misconduct listed on the webpage.  This could be anything from an oral reprimand to suspension from the institution.  The procedures for allegations and appeals also appear on this page. Visit the college's Academic Integrity page for more information.

Two ways to use someone's ideas are quoting or word-for-word, and paraphrasing, or rewording. Either way, give the original author credit for their idea.

When using someone's idea word-for-word, introduce it either before or after the quote, and put their words in quotations. Then, give the author credit directly after the sentence using the appropriate citation style.

As Charles Dickens famously wrote, "It was the best of times, it was the worst of times", which it most certainly was for all of us in that fateful summer (1).

The source must also be included at the end of the paper in a list of Works Cited, such as this one below which is following the rules of the MLA style.

When you take someone's ideas and reword them using your own vocabulary, you still need to give the original author credit.

As when quoting, the source must be included at the end of the paper in a list of Works Cited, such as this one below which is following the rules of the MLA style. 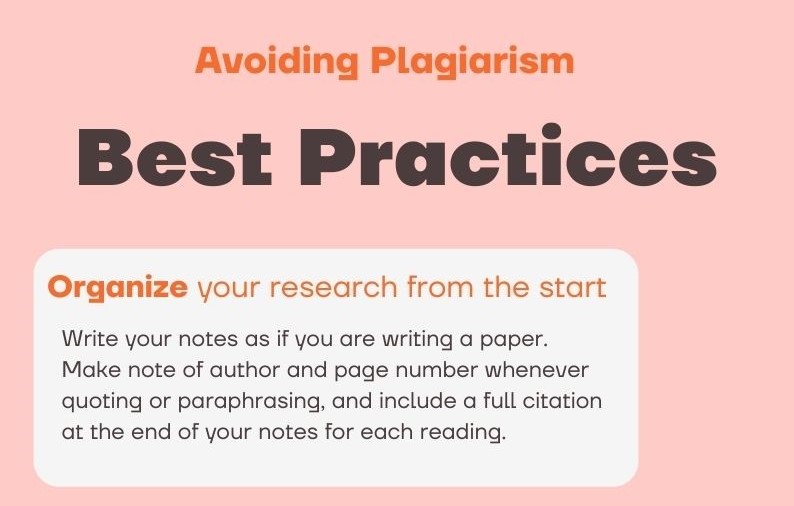 Organize your research from the start

Cite your sources and format your citations

Turn in your own work

Acknowledge the work of others

The exception to citing sources is when something is considered common knowledge. But what does that mean?

Common knowledge is information that the average reader would know and accept as reliable without having to look it up.

How do you know if something is common knowledge? Consider: