The Truax library has 5 Kindle Fire HDX 7" devices that are available for checkout for students. Kindles are available on a first-come first-served basis.

The Kindle can be used to read ebooks, explore/play apps or search the web. 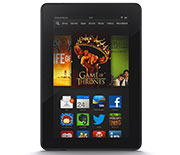